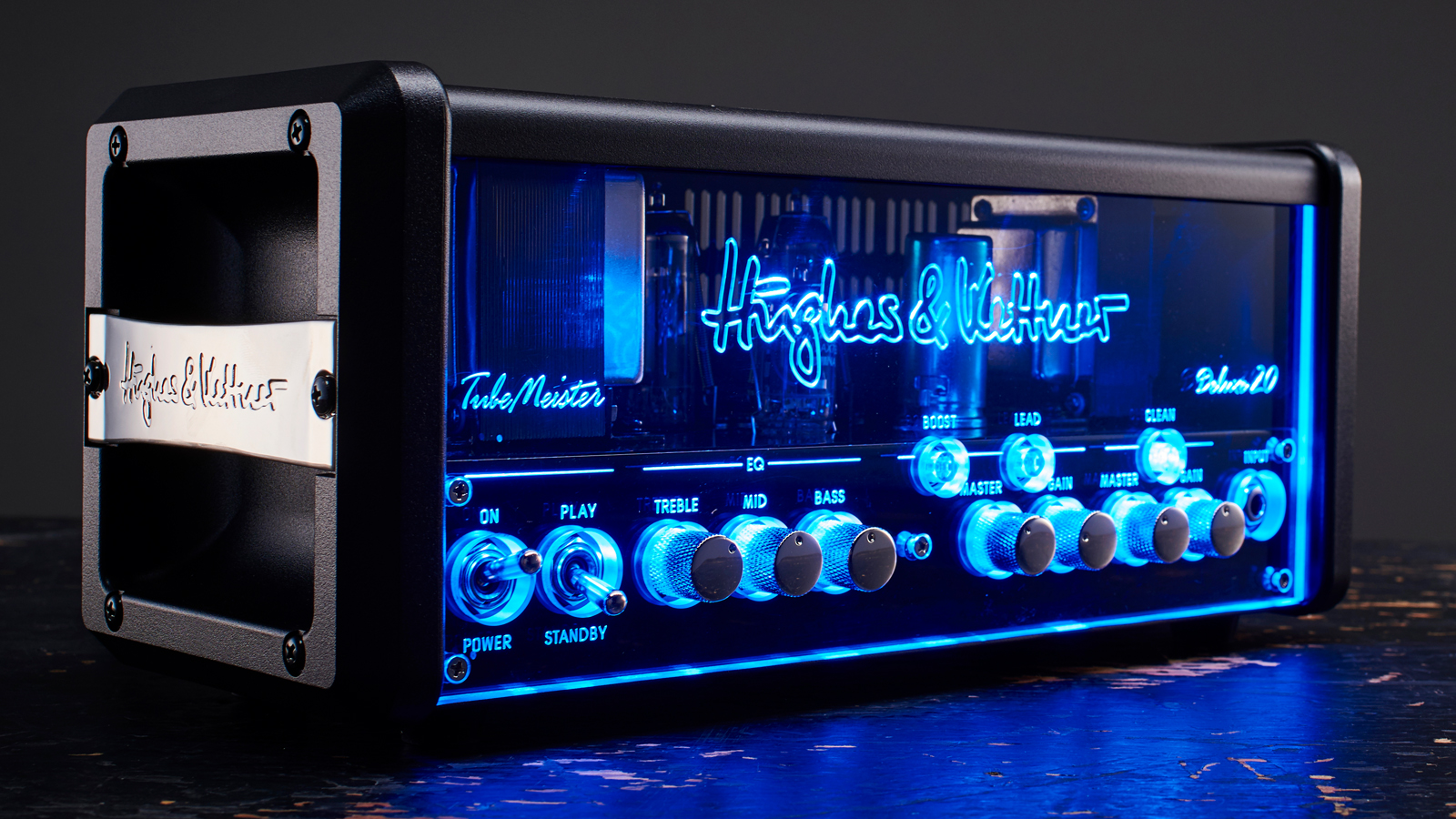 At one point in time, capturing the ultimate guitar tone involved high-end recording studios, scores of amplifiers, and a slew of microphones. However, nowadays, recording guitar is an entirely different story. Giant leaps forward in technology has brought easy-to-operate audio interfaces to the masses, allowing absolutely anyone to track professional sounding guitar from the comfort of their own home. Better yet, with the guitar amps specially designed for recording, you don’t need to learn any fancy microphone techniques either.

So, with every musician now having a portable studio hidden away inside their laptop, it would make sense for amp manufacturers to include handy features to streamline the recording process. As a result, it’s becoming increasingly more common to find practice amps with built-in interfaces, designated line-outs, and even onboard red boxes. However, with so many options available, it can be tricky to decide which amp is the right one for you – but don’t worry, we’re here to help.

Below you’ll find five amps that we believe make brilliant studio companions, as well as feature-laden practice buddies. We have affordable options from the likes of Blackstar, Boss, and Positive Grid, as well as premium choices from Hughes & Kettner and Kemper. So without further ado, let’s dive into the best guitar amps for recording and see if we can get you one step closer to recording that hit record.

The small but mighty lunchbox head

We’d go as far to say the Tubemeister Deluxe 20 is the reigning king of lunchbox amp heads. This petite amp may be small, but it’s packed with the killer tones and superb recording-friendly features Hughes & Kettner are known for.

From crystal cleans to filthy hard rock drive, this amp is able to cover a myriad of styles with ease. Throw in a powerful three-band EQ and a searing boost option and you have an amp that will easily handle any situation.

The built-in Red Box AE (Ambience Emulation) feature brings a world-class cabinet simulator to the fold, allowing you to seamlessly record the tone of your amp with no need for microphones, and better yet, the Tubemeister can also be run at 20, 5, 1 or even a totally silent 0W, making it easy to get the sound of a cranked valve amp at home.

Every sound you’ll ever need

Make profiles of your own amps

Overkill for those looking for a basic set-up

Digital modeling technology has come a long way from being able to just approximate the sound of an iconic amp to being able to fully emulate every facet of its tone – and nothing proves this quite like the Kemper Profiler.

This unit may look more like a heart defibrillator than an amplifier, but trust us, this is a valuable piece of studio equipment that is a must if you want a slew of different tones in one box. Now, many guitarists own a number of amps, each we love for different reasons. We may have a Fender amp with pristine cleans, a Vox with an aggressive mid-range, and a Marshall with seemingly endless gain, but the problem is we can’t use them all at once – well, without a lot of hassle.

This is where the Kemper shines, as it enables users to create models of any amp they own, all while giving them the option to share and swap these models with thousands of other Kemper owners.

Too digital for some users

Now, at this point, you don’t need us to tell you how good the Boss Katana is. This super versatile modeling amp has captured the hearts of many players with its iconic Boss effects and useable realistic emulations. That said, many players overlook this humble amp as a recording device.

The Katana 50 allows you to record using two methods – three if you include micing the amp. The first of which is to use the dedicated ‘phone/recording’ output located on the rear of the amp. This enables you to take a summed mono signal directly to your preferred recording interface and is a perfectly viable way to get your killer Katana tone into your DAW.

The second option is to record via the onboard USB, essentially turning your amplifier into a recording interface. Not only does this simplify the recording process, but it also allows you to unlock the stereo effects present in the Katana.

Perfect size to sit on a desk

Go for the HT-5 if you need more power

This teeny-tiny Blackstar may only be 1W, but for this application, we don’t need power, we need tone – and the Blackstar HT-1R has that in spades. Running a low wattage amp allows you to dime controls and get that pushed tube tone without annoying the rest of the household or the neighbors.

Featuring Blackstar’s ISF control, the HT-1 allows you to effortlessly shape your tone, with a choice of a US or UK-style sound available at the turn of a dial. This miniature amplifier also comes equipped with a direct USB output, making recording ridiculously simple.

So if you are looking for a true valve tone at home with simple to use recording features, this Blackstar HT-1R may be the best option.

Easily one of the smartest amps on the market

Okay, so the Spark’s strength may be as a practice amp, with its Bluetooth audio, auto-chord function, and accompanying app, but it should not be overlooked as a recording device. Now, it shouldn’t come as much of a surprise that the Spark is an excellent audio interface, considering a titan of the plugin world manufactures it.

Powered by Positive Grid’s award-winning Bias tone engine, this amplifier is loaded with over 10,000 tones, ranging from realistic amp models to perfect recreations of classic stompboxes – meaning your recordings will sound spot on!

Like other amps on this list, the Spark comes with a built-in USB output and even comes with a free copy of PreSonus Studio One Prime software to help get you started.

Today’s top deals on the best guitar amps for recording

Can I use any amp for recording?

In short, yes. Any guitar amp can be used for recording. Whether it’s a vintage classic or a minuscule practice amp, you can place a microphone in front and capture the tone. That said, some amps shine more than others in the recording booth.

Now, you’d be forgiven for thinking that the bigger the amp, the bigger the tone when you are recording. But the reality is unless you have the appropriate soundproofing at home, you’ll never be able to get the amp loud enough to capture its true tone.

You may be surprised to learn artists such as Mike Campbell, Jimmy Page, and Bonamassa have all employed the use of undersized amps to achieve massive tones. The reason is that small amps can be cranked and pushed to their limits without excessive volume, making them the perfect option for recording. So that’s why we highly recommend smaller wattage amps for your home studio.

What features do I need?

When it comes to the best guitar amp for recording, there are a few key features that are an absolute must for us. The first of which is a designated line output. This will allow you to take the output of your amplifier directly into your audio interface, with no need for microphones. Really clever amps even have an emulated output, which simulates the sound of the speakers ensuring your recorded tone sounds just like the amp did in the room.

Now, some amps even come with a USB out, which effectively turns the amplifier into an interface making the entire recording process even more seamless. This is a convenient feature if you don’t have a recording interface already and you want to kill two birds with one stone, so to speak.

The last feature we highly recommend is a power attenuator – or power soak as it’s sometimes called. This is particularly useful in valve amps as it allows you to push your amp into natural overdrive without blowing your windows out. It’s common to see half power modes, and some even drop the power to a measly 0.5 Watts.

Should I go for an amp or use plugins?

We can’t talk about recording guitar without mentioning the mass of impressive amp modeling plugins on the market. With software such as IK Multimedia’s Amplitube (opens in new tab), Positive Grid BIAS (opens in new tab), and Neural DSP, it is, in fact, possible to record album-ready guitar tones without an amp. So with so many popular software amps available, why would you purchase a real-life amplifier?

Well, first of all, we are big fans of the tactile nature of a real amp. There’s something about the feeling of controlling a physical amp that we believe you can’t beat. Not to mention, if you go for the Hughes & Kettner Tubemeister Deluxe 20 or the Blackstar HT-1R, you’ll get true valve tone in your recordings.

We also have to mention, that your recording amp can also be used in several different situations, from home practice to band rehearsal or even gigging – giving you consistency across your live shows and demos.