Husband-And-Wife Team Aim To Break Down Barriers In 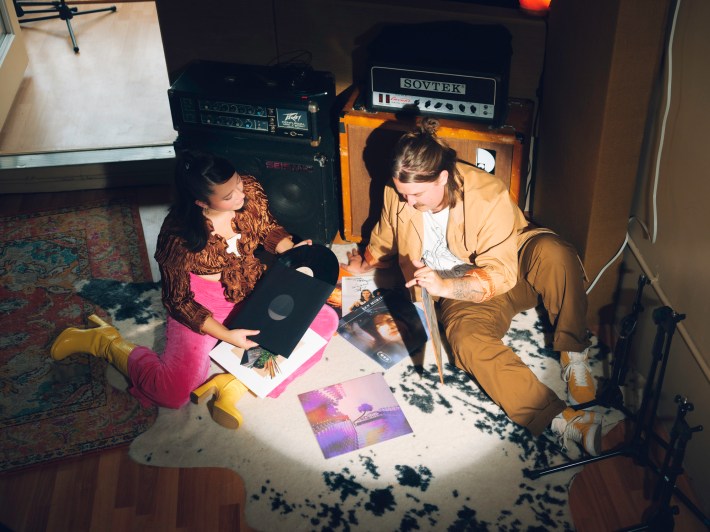 HUMBOLDT PARK — For some musicians who are queer and Black, Indigenous or people of color, especially those just starting out, getting music out into the world can be challenging.

Mende and his wife, DeAnna Doersch, launched Friends of Friends recording studio, 3036 W. Chicago Ave. in Humboldt Park, to break down barriers in the music industry and support queer and people of color musicians. They work with a long list of mostly local performers, many of whom are Black, Indigenous and identify as queer.

NNAMDÏ, Sen Morimoto and KAINA are just a few local musicians who’ve recorded music at Friends of Friends with Mende and Doersch.

“When you think of … who would be comfortable in music studios, I would say that would be young, straight white men. We really wanted to make an intentional space for people who were not that,” Doersch said.

Mende and Doersch met in Chicago, but Friends of Friends started in Mende’s hometown of Jacksonville, Florida.

Mende, 28, wanted to strike out on his own after years of working as an audio engineer at Chicago studios like Electrical Audio and Audiotree. And Doersch, a 27-year-old graphic designer and experiential marketer, was looking for a new challenge.

They converted the lower level of their Florida home into a recording studio in 2020.

“We do all aspects of music production,” Mende said. “We have some artists who come in like, ‘Hey, I recorded this somewhere else, and I want to make sure I finish it and can release them.’ Some people who are like, ‘I’ve never done this before. Let’s have a meeting.’”

Friends of Friends saw success in Florida, partnering with indie record labels Sooper in Chicago and City Slang, based out of Berlin. But last year, the couple decided to move back to Chicago, where they had an established network.

The two took over the Chicago Avenue recording studio, which was formerly occupied by audio engineer Matt Hennessy, of VSOP Studios. Friends of Friends Chicago opened in March.

“In Florida, we kinda became people to look to within the scene within a year, but we’re so young and there’s so many things for us to learn. That’s a little intimidating,” Doersch said. “We really wanted to be in a community where we could be learning more and there’s more veterans teaching younger people things. We’re not the all-knowing. We made the decision that Chicago is the move.”

Friends of Friends offers recording, mixing and mastering with an “immersive” Dolby Atmos system. Freelance engineers can also rent out the space, which is outfitted with a kitchen and a lounge area — a space made to feel like “your very cool friend’s apartment,” Doersch said.

Doersch is in charge of the studio’s visual design, while Mende handles all of the audio engineering.

Like in Florida, most of the musicians they work with in Chicago started out as friends of friends, hence the studio’s name, they said. For example, they met Tasha while working on KAINA’s EP. Tasha then introduced them to another local artist, Kara Jackson, who has become a client.

This way of doing business has given Friends of Friends a strong sense of community, Doersch said.

“I think a lot of people go about having studios saying, ‘Hi, we’re here. Come record with us.’ We really don’t see it that way,” she said. “We see our role more as building community, and if we can help you [record], we’d love to do that. If your setup looks like you can do home recording, Brok has helped people with that.

“It’s not about selling things to people, it’s a lot more about: How do we raise people up to do exactly what they want to do? I think that breeds a lot more art and creativity.”

Doersch, who is queer, said it’s also “super important” inclusivity and diversity remain at the forefront of the business. They hope to roll out micro grants for queer and people of color musicians who’ve been shut out of the industry and host networking events as Friends of Friends grows, she said.

“Jacksonville is super segregated. Chicago is, too. It was super important for us to state that [we’re queer- and people-of-color-friendly],” Doersch said. “If you don’t state it, it can’t be assumed, especially down there” in Florida.

Click here to support Block Club with a tax-deductible donation.

Thanks for subscribing to Block Club Chicago, an independent, 501(c)(3), journalist-run newsroom. Every dime we make funds reporting from Chicago’s neighborhoods. Click here to support Block Club with a tax-deductible donation.

Listen to “It’s All Good: A Block Club Chicago Podcast”: